Located in Vaughan, Woodbridge was once its own city until 1971. It is situated in a series of valleys and hills to the north of Toronto that was once composed mainly of farmland.

Today, Vaughan is a striving city with relatively new house development and surrounded by green spaces. Woodbridge is home to the Boyd Conservation Area, a large land preserve along the Humber River. 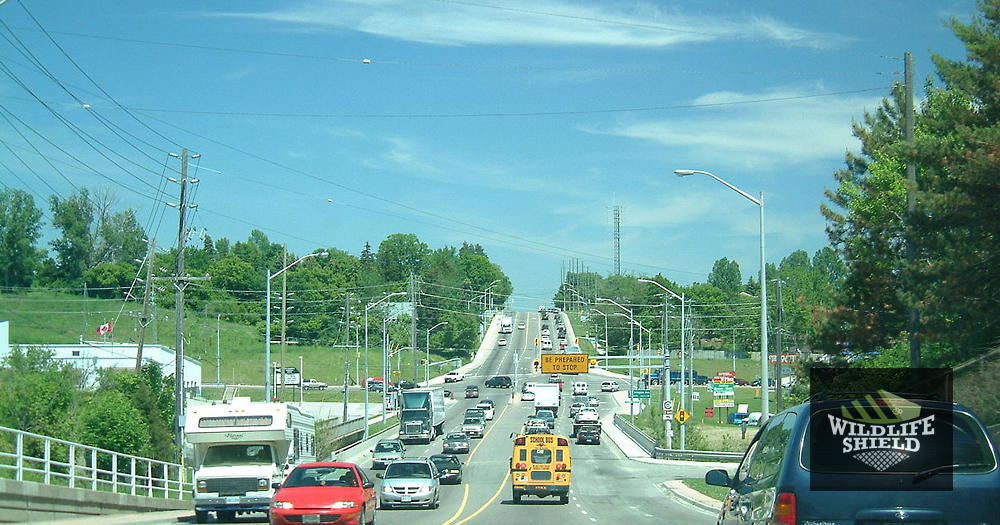 A stretch of Highway 7 in Woodbridge – Vaughan

Well known for its large Italian community, Woodbridge is the go-to place for some of the best Italian Restaurants. These and other small businesses line the sidewalks along stretches of Hwy. 7 and surrounding streets.

This case will look at the removal of raccoons in a Woodbridge home that had been inside an attic for a few days.

According to the homeowner, raccoons had apparently made their way into the attic of the home and may have been living in there for some time. Our team of certified wildlife technicians was dispatched to conduct an inspection and come up with a plan of action and perform a raccoon removal in Vaughan. The inspection focusses primarily on the roof structure, and we try to identify all points of entry into the attic. Areas of concern are usually the soffit intersections as well as any damage to the drip edge of the roof. 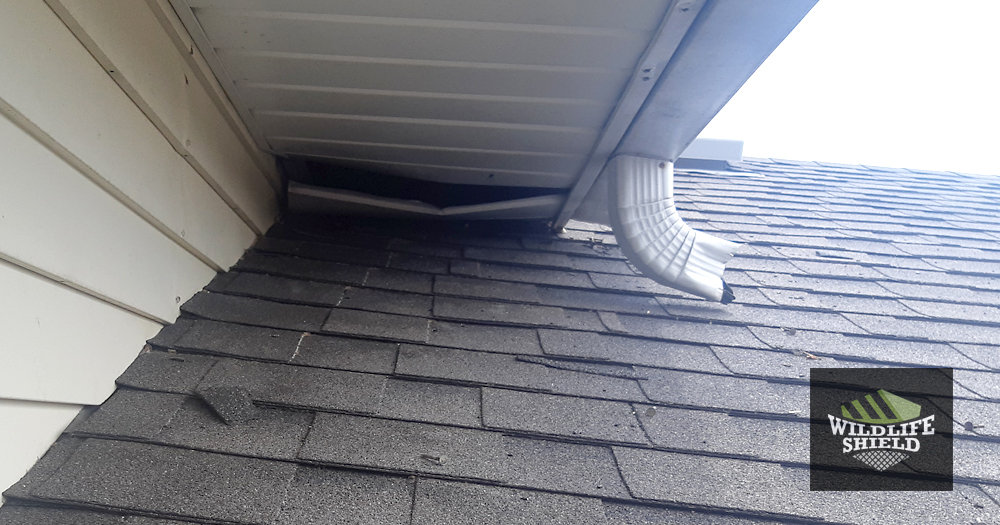 A soffit intersection was badly damaged and allowed entry into the attic by raccoons.

In this case we found the intrusion to have taken place at one of the soffit intersections. There was damage to the area which had allowed the raccoons to move into the attic.

Our technicians also found a damaged roof vent. This indicates that an animal had been trying to get access through the vent. Roof vents are notorious for attracting wildlife, especially in the colder months, as they emit heat. Animals are attracted to their warmth and will gnaw at them in an effort to gain access. 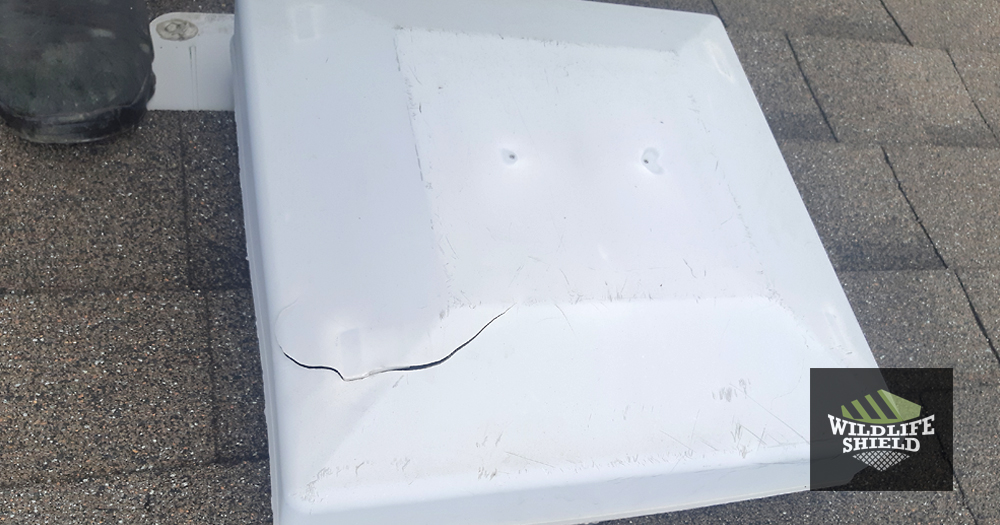 A damaged exhaust vent was found on the roof of the house.

One area of concern in this situation was that the animals had been active for a while and there was potential for babies to be present. It is part of our inspection procedure to visually assess the inside of the attic to ensure no babies are present. None were seen by our technician, but it was noted that the prolonged stay of the raccoons had caused damage to the insulation. A strong smell of feces and urine was also present. 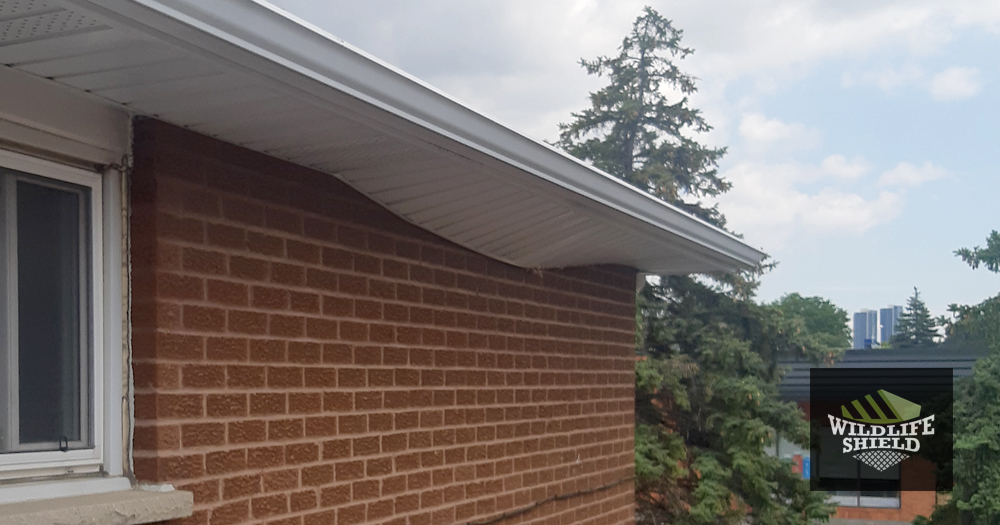 A stretch of the soffit along the wall had come loose and should be secured.

It was determined that sealing off the area was the first line of defense, and afterwards we would disinfect the attic.

Our team returned to seal off all entry points into the attic. The soffit intersection was covered with galvanized steel mesh and a one-way-door was installed. This door would allow any animals still inside to vacate in a safe manner and not be able to re-enter. 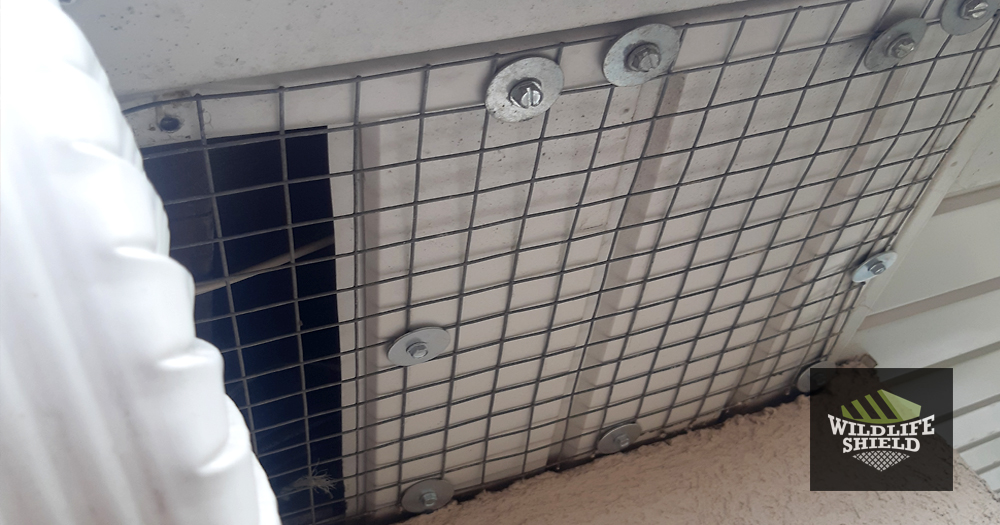 A compromised area of the soffit was protected by galvanized steel mesh.

The damaged exhaust vent was repaired, and all 12 roof vents were protected with PVC coated galvanized steel covers. This will prevent animals from gnawing at the vents and cause further damage.

As added protection, our technician also reinforced a stretch of the soffit along the wall than had come loose. Although it was not allowing entry into the attic, we decided that securing it would prevent any problems in the future. 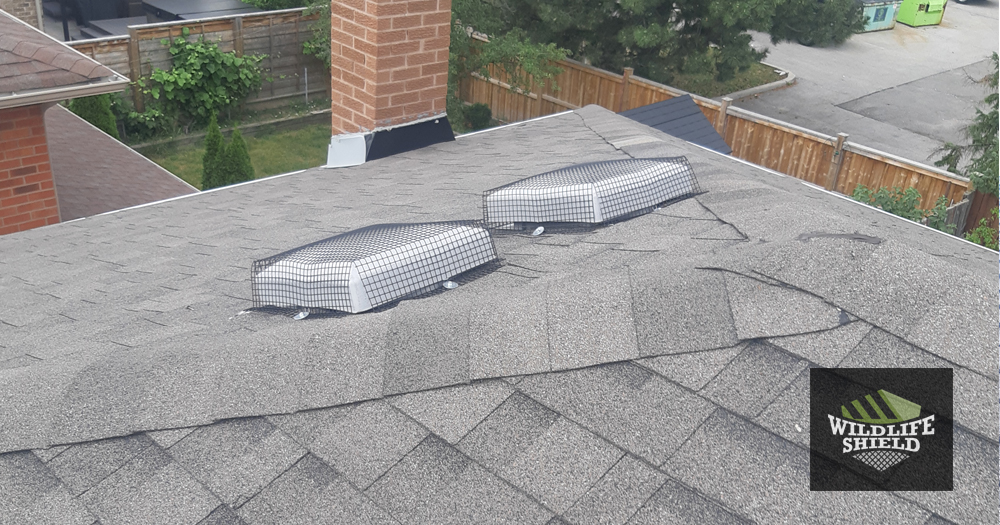 We returned a few weeks later to remove the one-way-door and seal it with mesh, ensuring that the soffit intersection was fully protected. 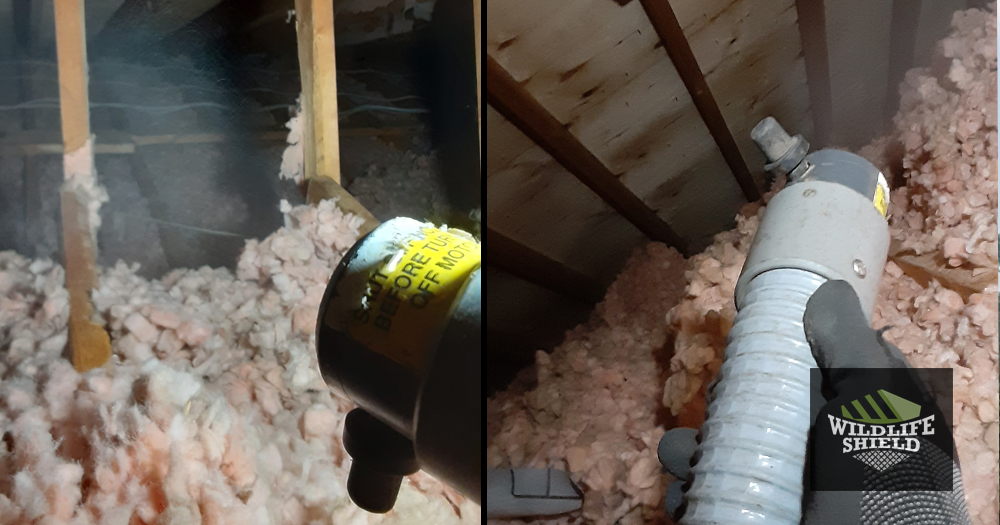 Disinfectant was released throughout the attic to kill pathogens and remove scents.

Our technicians then proceeded to disinfect the attic through two points of entry from the inside of the home. All the disinfectants we use are botanical broad spectrum hospital grade disinfectants that are also labeled by Health Canada as active Covid-19 killers. Application is usually delivered via handheld sprayers or ULV foggers. The ULV foggers evenly distribute their disinfectant mist and coat all surfaces.

It is imperative to act quickly when you first notice animal activity in your home. Leaving animals to settle in and make themselves at home will often prove to be damaging. In this case, when we visited the home it had been some time since the animals had moved in. Luckily, the raccoons did not have babies, but damage to the insulation had occurred.

The most important action to take in this case was to secure the entire roof structure and prevent entry by any animals. Galvanized steel mesh is used because of its durability and its strength- animals can not chew through it.

Because of the long stay of this animal, we determined that a disinfection and deodorization was a great way to remove any present pathogens as well as remove all scents left by the raccoons. This will help prevent other animals being attracted to the area.