Raccoons and other animals commonly find shelter in people’s homes when temperatures drop, and mating season begins. Structures like decks and attics that are exposed to the outdoors provide them with an excellent place to hide. In this case, the owners of an Etobicoke residence had mice in the fall and raccoons in the spring. Members of the Raccoon Control team identified the pests, treated for them accordingly, and excluded them to stop anything like this from happening again. If you suspect some raccoon activity on your property, give Raccoon Control a call now: 647-557-7932. This article outlines the services of events of a Etobicoke raccoon removal. 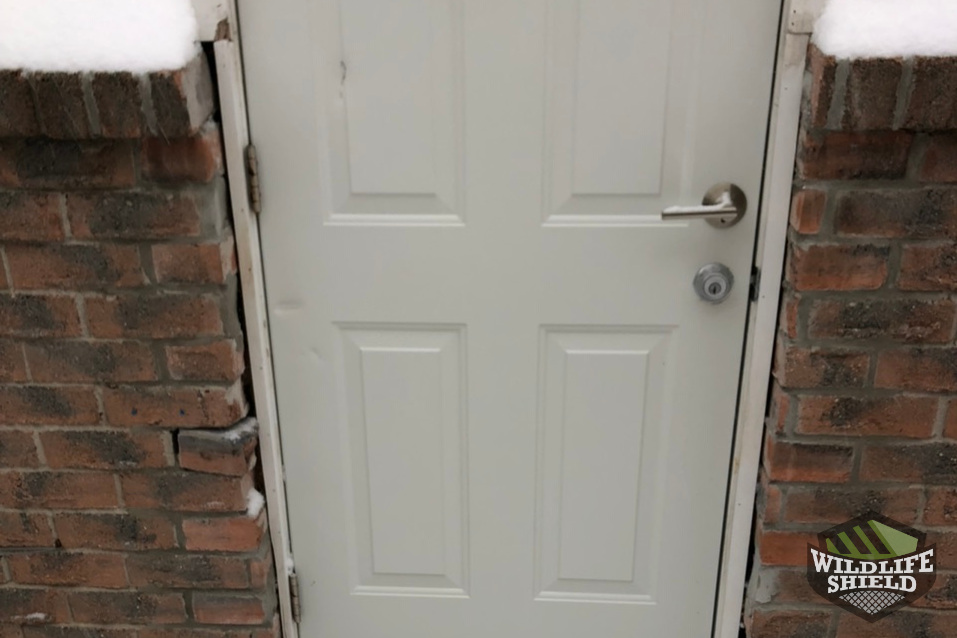 The owners of this Etobicoke property first called us when they were struggling with an infestation of mice. Mice had invaded the home in early fall and infested the attic, where they persisted for months. The pests could be heard squealing and running around at night. Upon inspection, one of our technicians found that there were many cracks surrounding the side door of the house. There were approximately 8 feet worth of holes in the bricks. Mice are very small and can squeeze through gaps merely one quarter of an inch wide – these gaps were likely responsible for letting the pests in.

To get rid of the mice, the technician sealed the gaps surrounding the door with mortar and placed bait stations in areas of mouse activity. Bait stations are plastic, tamper-proof containers that house the commercial rodenticide and require a key to open. Mice are attracted to the bait inside and reach them by crawling through small holes in the sides of the containers. Once consumed, the animals retreat into their nests to perish. This is the most effective way to eliminate mice and can only be provided by licensed exterminators. Within a few weeks, the mice were gone.

Come spring, however, the homeowners called us back to say that they could hear squealing sounds in the ceiling of the laundry room in the basement. A technician promptly returned to the property to inspect. Raccoon Control and all its affiliates provide extensive warranties. If contractual pests return during the warranty period, we will absolutely return to evict them again. In this case, no mice were found. The technician thoroughly examined the basement ceiling and the exterior of the property but could not find any pests at the time of the inspection. What could have been making those sounds? 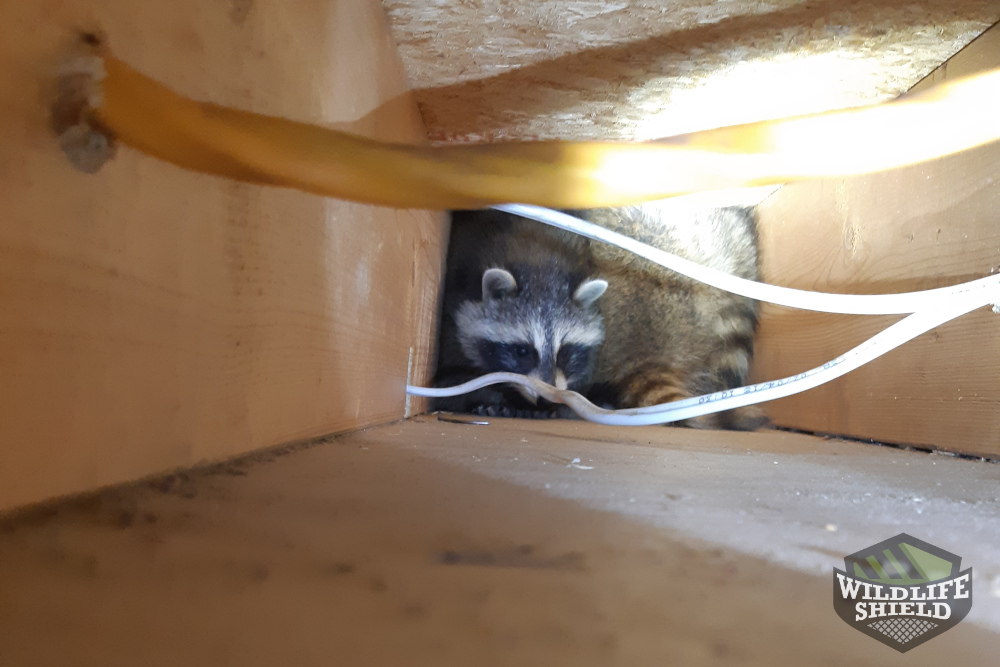 Just a few days later, we received another call from the owners saying they had seen a baby raccoon in the ceiling of the basement. A technician performed another inspection and found that the raccoon had gotten there by crawling under the deck and into the floor joists between the kitchen floor and ceiling of the basement. Because the ceiling was unfinished, the raccoons could sometimes be seen inside the house. The home’s deck extended from the kitchen to the fence between the property and neighbour’s yard. It was here that the technician found where the raccoons were coming from. 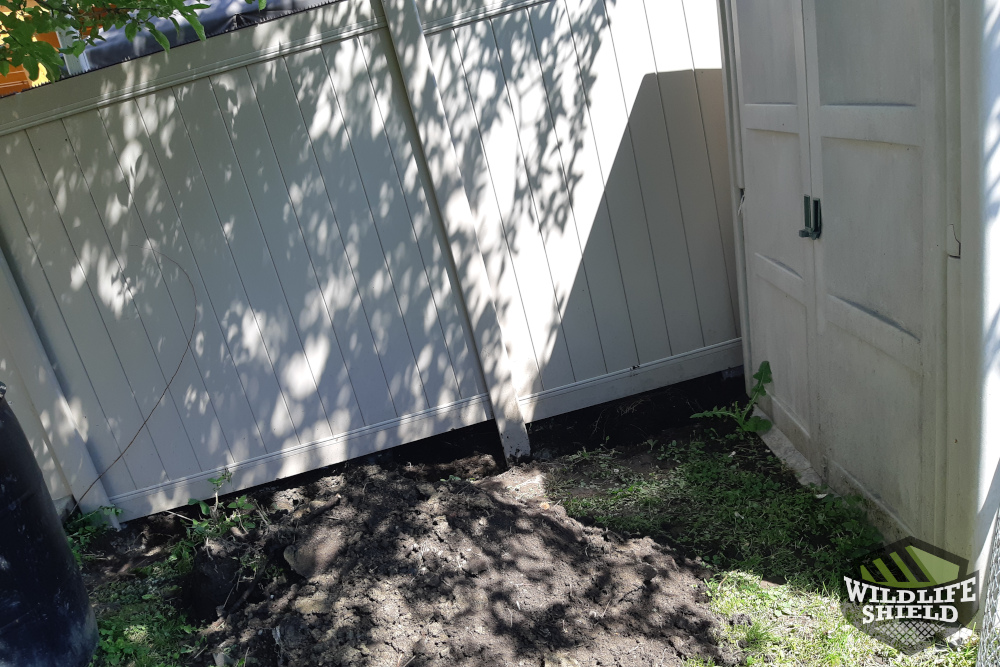 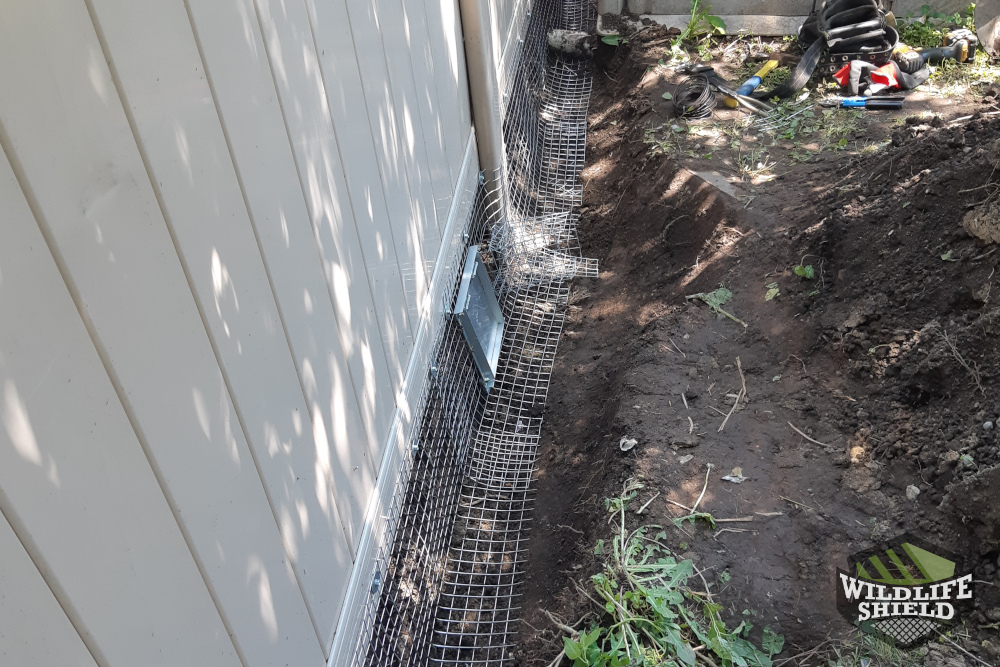 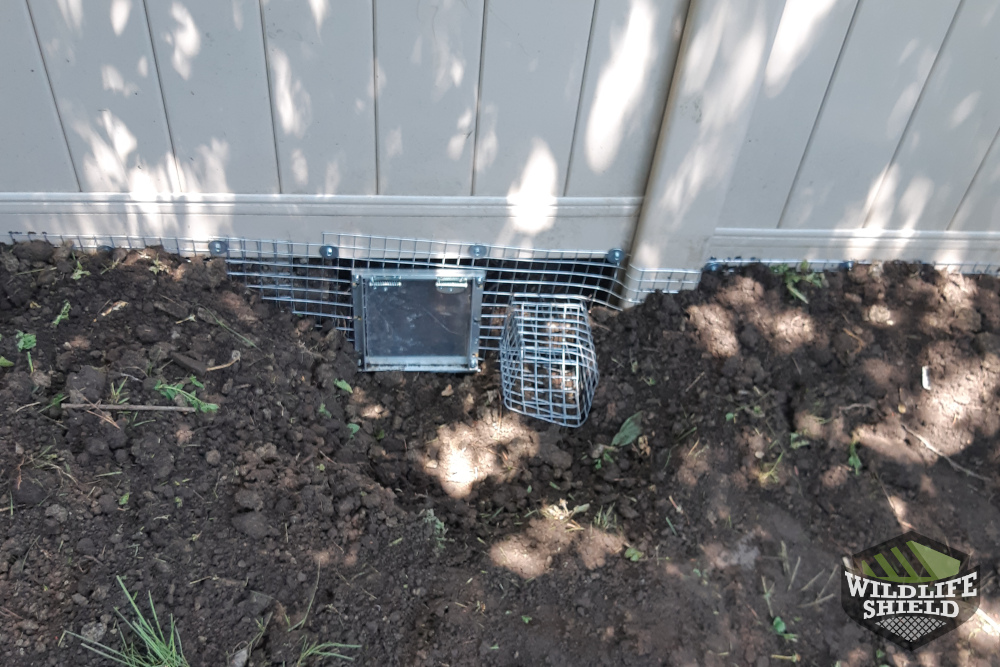 The raccoons in this case were removed from the property by installing one-way doors to the bottom of the fence, on the neighbour’s side, and excluding the remaining space with steel mesh[m1] . This required permission on the neighbour’s part. The technicians on-site dug a foot deep into the ground, about half a foot outwards, thus creating a right angle of mesh to keep animals from burrowing under the fence and bypassing the mesh.

A one-way door is a spring-loaded, plastic flap that is screwed into the wall and opens only one way. In this case, it was placed on the bottom of the fence along with a smaller mesh door for the younger raccoons. When raccoons are too young to move on their own, we remove them by hand and place them in a warm box next to the den. Here, the babies were mobile, but not yet strong enough to push the spring-loaded door, so the technician put a smaller door made of mesh for the babies to exit safely on their own. This method of removal is totally humane and does not harm the animals in the process.

Within a few weeks, the raccoons were gone, and the homeowner could not hear them anymore. A technician then returned to the property and removed the doors. In their place, he installed more galvanized steel mesh to prevent any more animals from coming through. This material is rust-proof and cannot be chewed through nor torn apart by wildlife.

Mice, raccoons, and other suburban pests are opportunistic creatures. They will gladly break into the home in the spring and fall to raise their young and wait out the cold. In this case, mice had snuck in through the cracks between the bricks and raccoons had found their way into the basement through the deck on the neighbour’s side. It is important that all holes and gaps surrounding the structure of the home be sealed to prevent this from happening. If you are interested in wildlife-proofing your home, call Raccoon Control. Our technicians are thoroughly trained and experienced in all forms of pest control and exclusion. Reach out to Raccoon Control today for safe and affordable pest control services: 647-557-7932.