The following case study recounts the removal of a raccoon from a Scarborough family’s deck. Raccoons are common in urban neighbourhoods and frequently take advantage of decks and other structures with openings large enough for the animals to crawl inside. A member of the Raccoon Control team safely removed the animal in this case by installing a pest-proof mesh into the sides of this deck along with a one-way door. This case will detail the steps involved in the removal and exclusion process. If you have any questions or concerns regarding the wildlife on your property, give Raccoon Control a call for raccoon removal in Scarborough. Call: 647-557-7932. 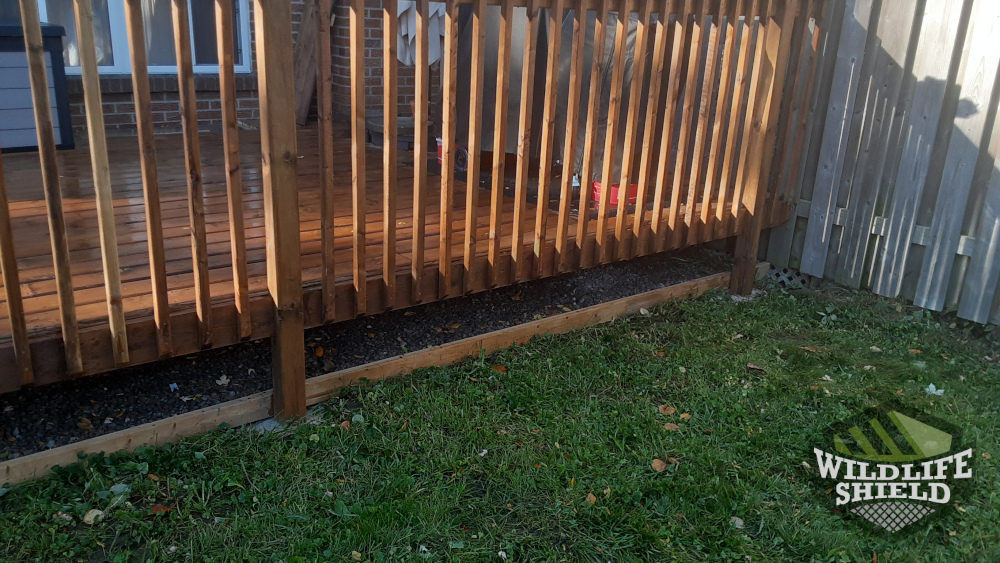 The homeowners in this case reported visible raccoon activity under their deck. They had just had the deck built that summer, and a raccoon had taken to living underneath it. The homeowners could even see it sleeping in the window well beneath the deck. A technician was deployed to the site and conducted an exterior inspection to get the full scope of the situation. It immediately became clear that the deck was very prone to wildlife occupancy from not only raccoons, but skunks, rats, and squirrels alike. The deck provided the animals with the perfect shelter and protection from predators. 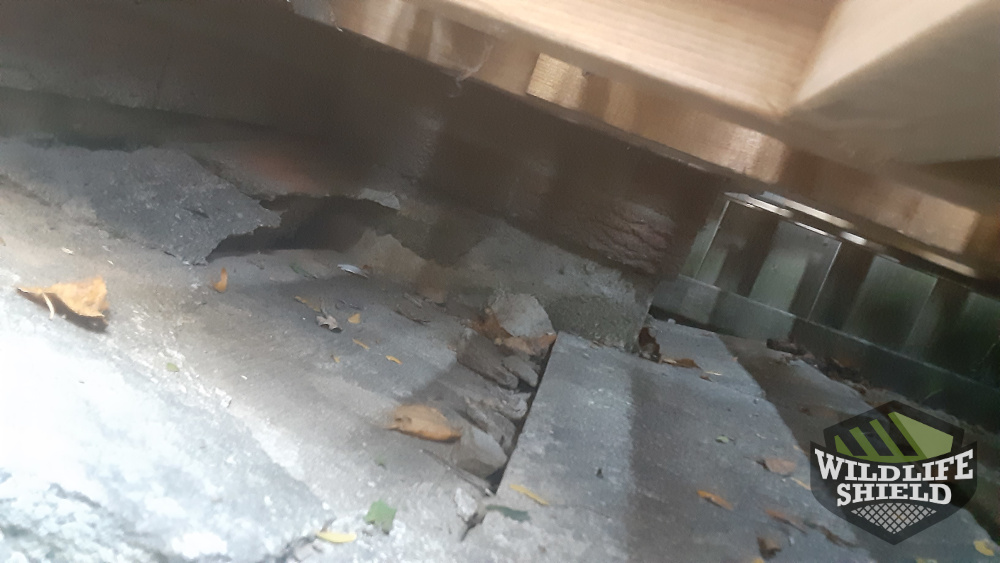 This deck was particularly prone to wildlife because of its dimensions. It was quite large, giving the animals the perfect opportunity to give birth and to raise their young under the deck. Moreover, the deck was 1 foot above the ground which is ample space to crawl through. Raccoons are quite slim animals; the reason we do not perceive it that way is because they are covered in thick fur. Smaller pests like mice and rats can easily access the underside of the deck without any issue. 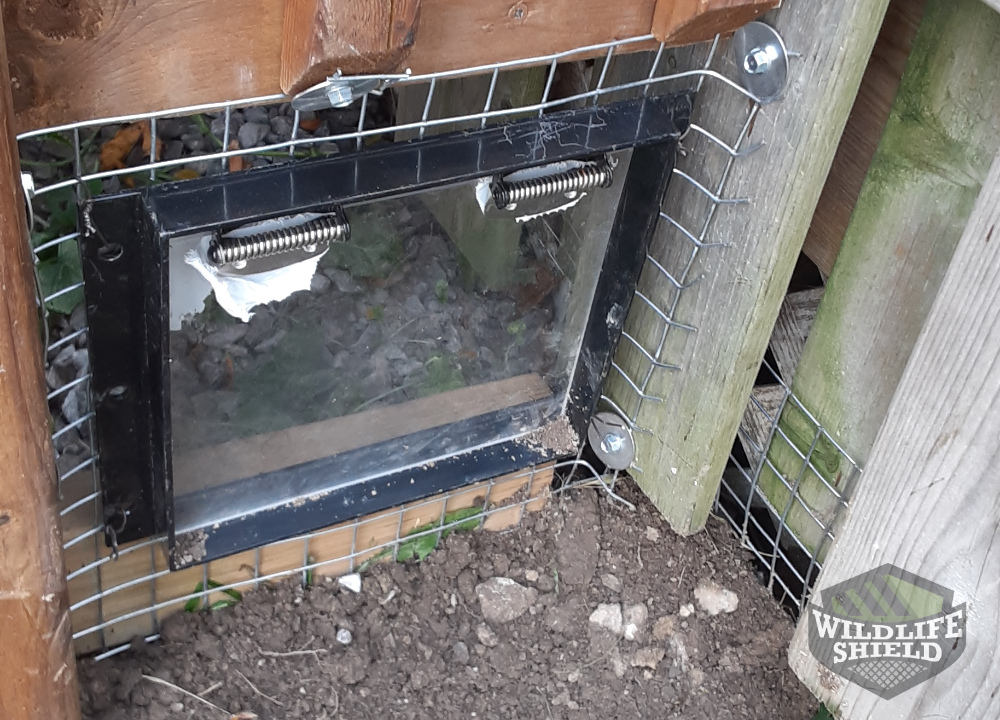 It was immediately determined that the deck needed sealing off to prevent raccoons and other pests from taking advantage of its space. The raccoon was still inhabiting the underside of the deck, and thus needed removal. To evict the animal, a one-way door was mounted to the side of the deck. Much like a cat door, this contraption consists of a plastic flap that allows raccoons and other animals to pass. However, this door only goes one way. Once the raccoon would pass through the one-way door, it could not go back in. Raccoons usually leave their dens within 7 to 10 days, depending on the weather conditions. 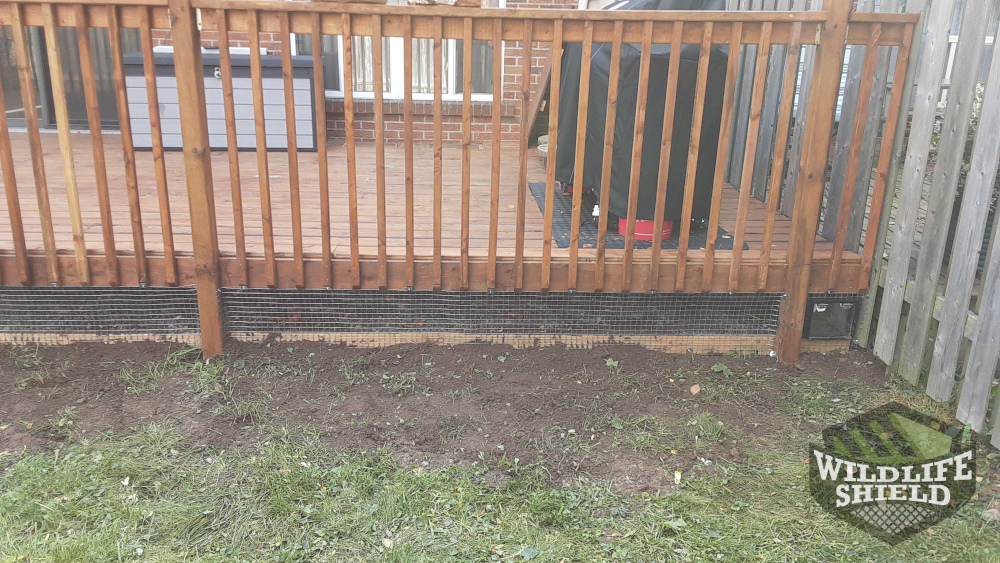 In addition to the door, the gaps along the perimeter of the deck were sealed using a durable and flexible material called galvanized steel mesh. This material is strong enough to withstand any attempts of breaking in with brute force. It is also it is strong enough to safeguard against the sharp incisors of rodents who will try to gnaw their way in. A total of 40 feet were sealed off. The galvanized steel mesh was secured and held in place using washers and blots in the sides of the deck. 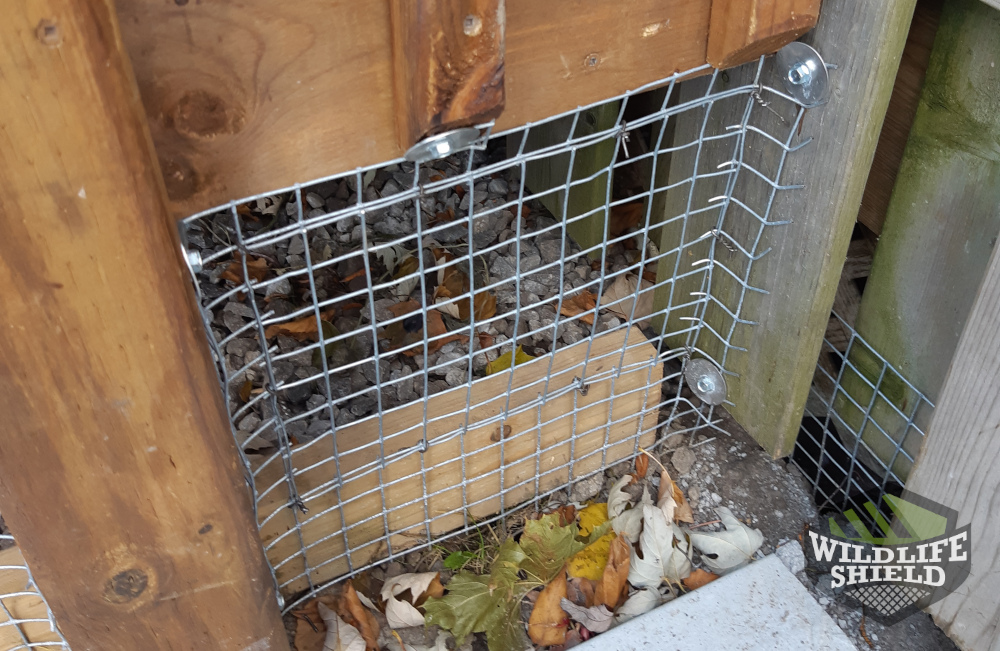 A few days later, the homeowner stopped witnessing any raccoon activity. Some time after that, the technician returned to the Scarborough property to confirm. As expected, the raccoon had vacated the deck. The one-way door was then removed and replaced with more galvanized steel mesh. Thus, the deck was completely sealed off from the neighbourhood’s wildlife and no raccoon activity was reported after this final visit.

This raccoon case highlights that attics are not the only preferred habitat for raccoons. Other man-made structures, like decks, are highly sought after by these urban nuisances. The deck offers raccoons with a shelter from the elements and predators outside. Once the problem at this Scarborough home was identified, the technician knew what to do to evict the raccoon and prevent it from coming back. Knowledge of raccoon behaviour is a tremendous asset in finding the fastest and most effective way to get rid of them while protecting the property from other pests. A careful process of elimination and observation made during the exterior inspection is what lead to the successful resolution of this raccoon case. Call Raccoon Control today (647-557-7932) if there are raccoons living on your property and you want them gone.