The following details a raccoon feces removal job in Brampton, Ontario. The initial call to the property was for a severe and ongoing raccoon latrine on a shed roof in the back yard of the customer’s home. The raccoon would defecate on the roof almost nightly and the process of removal was too dangerous. So the customer called in professionals to do a proper cleaning.

Raccoon feces are a highly toxic compound. Due to what raccoons eat, almost anything with a preference for long-dead animal carcasses like the ones we throw in the garbage. Raccoons tend to feed and nest on one property and then defecate on another, though in truth the raccoon’s area of access is usually three or four properties at once. Raccoon feces contain a parasite called raccoon roundworm. This parasite can be inhaled when the feces has started to dry out. If you inhale a spore it will grow into a worm that will enter your bloodstream and travel to your brain. There it will cause damage that will result in symptoms that resemble Alzheimer’s. This parasite cannot be cured.

The exterior inspection found several raccoon droppings on the shed roof but not a massive amount. The feces were spread out and needed a wide spray of hospital-grade botanical sterilization as well as deodorization. This is done after cleaning to ensure the destruction of any raccoon roundworm spores. Not doing this would be leaving the customer in danger. 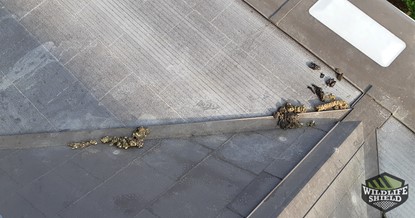 The initial measures taken by the technician included a complete cleaning of the roof of the backyard shed. The roof was not heavily coated in feces but did have a large number of droppings. The droppings were relatively fresh however some dryness could be seen which is the start of air-born raccoon roundworm spores. 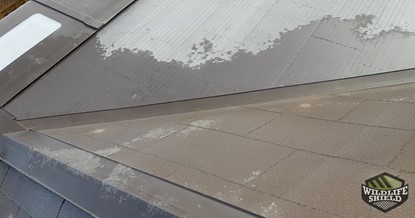 In conclusion, the process was highly effective in removing, sterilizing, and deodorizing the raccoon latrine. There have been signs of raccoon roundworm infection and the area is safe for use by the owners again. The customers were pleased and the issue was resolved.