Do Raccoons Have Fleas 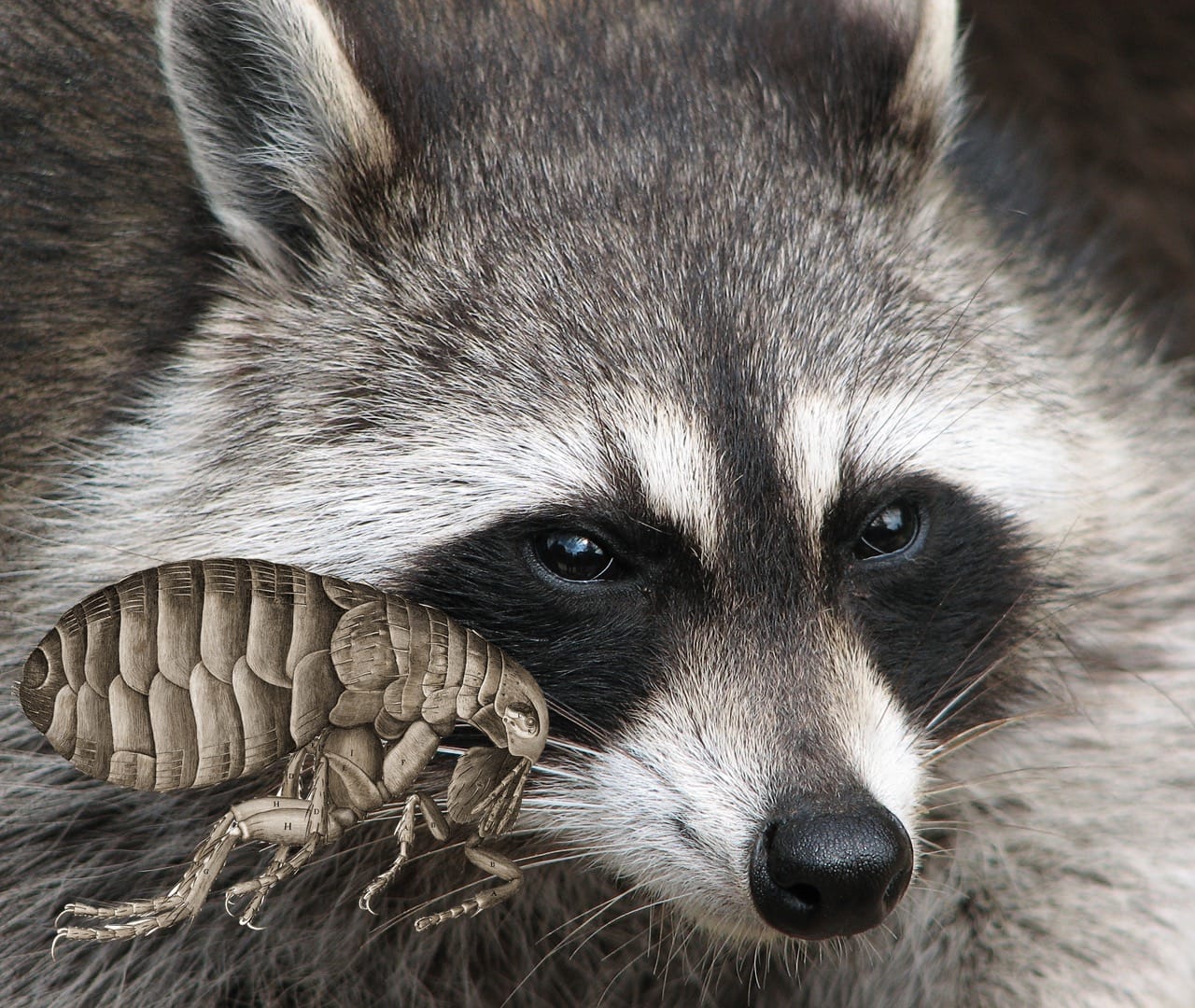 Do Raccoons Have Fleas

Fleas are perhaps one of the most common types of parasites found in any fur-bearing animals such as your domestic pets (cats and dogs). There are about 2,000 different species of fleas found throughout the world, and more than 300 different types found in Canada and the US. The most common type of flea is the cat flea also known as Ctenocephalides felis. Other kinds of fleas include the rat flea, dog flea, and human flea.

Fleas are not the easiest parasites to identify. However, they have unique characteristics that you could easily spot. They are wingless flat insects with three pairs of legs. The adult flea is about 1/8-inch long. They have a dark reddish-brown appearance with visible biting parts. Fleas are very hard to get rid of since they can move very fast on an animal’s body. You could try wetting the animal’s body or using a flea comb in case you want to visually identify the parasite.

Fleas live and feed on the blood of warm-blooded animals including human beings. However, their preference is furry animals such as cats, dogs, mice, rabbits, skunks, and raccoons. When a flea hatches from an egg and grows into an adult, it uses its long powerful hind limbs to jump onto its host, where it will spend the rest of its time feeding. During this time, the flea will eat, mate and even lay eggs on the host. The eggs will fall off the host onto the floor, blanket or yard in preparation for hatching.

A lot of homeowners often wonder if indeed raccoons have fleas. The answer is yes! Raccoons have fleas and will carry and pass them along to your pets or household. Fleas look similar despite the species, and most of the species will resemble and look like a cat or dog flea. Fleas have the capability of thriving in any warm-blooded furry animal. Meaning, a raccoon would be no different than a cat or dog to a flea. If you have been bitten by a flea, you must have noticed the nasty itchy bumps these pesky parasites leave behind. Taking a dose of antihistamine will help reduce the irritation.

It’s also important to note that fleas are not the only parasites that can be passed on by raccoons invading your property. Other insects can be passed on to your pets and your family such as mites, lice and even roundworms. Fleas known to cause irritation and infections to pets and humans.

Can raccoons bring fleas into my home?

Raccoons are very smart when it comes to getting entry points into your home and commercial property. They are attracted to our homes during winter when they come to shelter from extreme weather or nest. When raccoons invade your property, they often leave a trail of destruction behind that often amounts to thousands of dollars in repair bills. A potential threat posed by a raccoon infestation is the possibility of a flea outbreak.

Can cats get fleas from raccoons?

This is one of the reasons why it is dangerous to have many raccoons around a house, especially if you have pets. Raccoons can easily pass on fleas to your cat and, in general, as we said, to all the pets in your house. Although flea species are different between raccoons and cats, these parasites have fertile soil on any long-haired animal, especially on dogs and cats.

However, don’t despair. For pets such as cats, there are specific veterinary products that can counter the flea infestation. As a result, all you need to do is take your cat to the veterinary.

The problem, if your cat catches a flea infestation from a raccoon, remains the house. Not only because, of course, the products for your cat will not free you from fleas at home, but because cats are animals that run everywhere. Cats climb on furniture, climb on beds, crouch on anyone and this only means spreading fleas around the house, but also that you yourself risk an infestation. Especially because, maybe, you don’t notice it right away, and you allow parasites to thrive.

Besides, in addition to fleas, there is also a risk that a raccoon can pass ticks, lice or roundworms on your cat.

Do wild animals get fleas?

Through a study, the University of Queensland, Australia found that domestic fleas are infesting many species of wild animals around the world (except in Antarctica, for obvious reasons). And most of these fleas are of the two species that infest dogs and cats, the Ctenocephalides felis and the Ctenocephalides canis.

So not only can wild animals get fleas, they also risk being infested with domestic fleas. An infestation that risks transmitting new pathogens from domestic animals to wild animals and risks producing uncontrolled flea infestations.

Finally, according to data collected by the University of Queensland, two interesting things have been discovered:

Do raccoons get Ticks – Lyme Disease?

Yes, raccoons can get Lyme disease. Lyme disease is an infection that contracts due to the bite of an infected tick, the vector of the disease. However, sometimes even wild mammals, such as deer or small rodents, can carry bacteria in the wild.

And it is from wild animals that naturally transport bacteria that ticks begin to spread. Ticks, in fact, get bacteria when they feed on infected blood. And once infected, ticks pass on bacteria and disease to wild animals, pets and humans whenever they feed on them.

In any case, Lyme disease is transmitted only by ticks and their bites, which transmit the spirochete, the bacterium of the disease. As a result, there is no risk of contracting using raccoon bites or scratches, as far as we hope strongly that such a thing does not happen to you.

What should I do to prevent raccoons from spreading fleas?

In case you suspect that you might be having a raccoon infestation in your property, it’s important to act fast. In case you have pets you might have to respond immediately. The longer raccoons stay in your attic, the bigger the risk involved with spreading fleas.

Raccoons often feed on pet food left in the yard and around the home, when your pets access these areas, they are likely to pick up fleas from raccoons. Also, if there is an outbreak of fleas and other parasites in your attic, they are likely to spread fast throughout your house putting you at risk.

The fleas from a raccoon and other wild rodents are known to carry harmful pathogens that can cause deadly diseases such as plague. While raccoons might seem like cute, usually curious animals, they can significantly put your health at risk.  Contact our raccoon removal Oshawa company to safely remove the raccoons from your property.