Every property owner at some point will have to deal with rats. The first sign usually involves streaks of dirt on your walls, chew marks in wood and dark brown rice shaped dropping in your property. These are the common signs of an unwelcomevisitor, Rats!

Rats are more destructive than mice, they are physically larger and cause significantly more damage compared to mice. To make it worse, rats are filthy and carry contagious diseases. According to the CDC, about fifty thousand people receive rat bites every single year. Rats can destroy crops and property in a short period. That is why, when they show up in your home, its advisable to take quick precautionary measures.

What animals do raccoons prey on?

Raccoons are pretty easy to recognize. They have prominent black mask across their eyes, grizzled grey and black coats with a ringed tail. Raccoons are curious animals, and at first glance, they often come off as curious, but friendly animals. Its due to this cute nature that property owners often make the big mistake of letting them thrive in their property.

Raccoons feed on virtually anything they find in their way. In the wild, they will feed on both plant and animal food sources. In the human territory, they will feed on crops, pet food, leftover food in the dumpsters as well as other pests like rats and mice. Raccoons are opportunistic animals; they will not actively hunt other animals, however, if they don’t have an option, they will kill rats, cats, snakes, birds, and fish for a meal.

The answer is yes! Raccoons will eat rats when they get a chance. However, rats aren’t the easiest prey for raccoons to hunt. Rats feed and live hidden in structures, raccoons on the other hand only stay indoors during winter and nesting periods, they look for food outside. Therefore, raccoons and rats rarely cross paths, but in the event, they do, rats will always fall victims.

It’s also important to note that raccoons do not enjoy feeding on rats. Rats are very smart animals with a unique and effective sense of smell. They will easily detect the presence of a raccoon, and they are rarely caught unawares. Meaning, only the smartest raccoons can kill rats.

Can I use raccoons to eliminate rat infestation?

Yes and no. Raccoons will not actively feed on rats unless of course, they cross paths. Rats, on the other hand, are very cautious creatures and will avoid raccoons at all costs. While getting raccoons to solve an infestation problem might work, it might create another infestation problem altogether. It’s important to note that raccoons just like rats are pests. They will cause the same kind of destructions rat to do but on a larger and more significant level. Raccoons unlike rats are aggressive and will attack rather than take cover when cornered. Raccoons spread deadly diseases to humans, and their bites can be deadly. Therefore, getting raccoons to get rid of your rat problem is introducing another problem altogether.

There are several methods you can use to get rid of rats in your property other than introducing raccoons. You could start by clearing out your compound, always fastening your garbage bins, cleaning your surfaces, ensuring your property is well enclosed, clearing out sheds, garages, as well as your deck.

We can help you get rid of your rat problem

While you can employ all of the above measures on your own, each of them has its own challenges. Some of them are temporary fixes. Others will require experience and take a lot of work. In case you are having a hard time dealing with a rat or raccoon problem, get in touch with Raccoon Removal Pickering. We will not only handle your pest problem, but we will also ensure that it doesn’t happen again.

If you are reading this, you are probably wondering if indeed raccoons can keep the population of mice and rats under check? Well, the answer is yes! Raccoons are like goats; they will feed on anything and everything including rats, mice, and even poultry. Raccoons like most animals are omnivorous; they feed on both plants and animals. However, it is important to understand that raccoons will only turn to mice as a last resort. 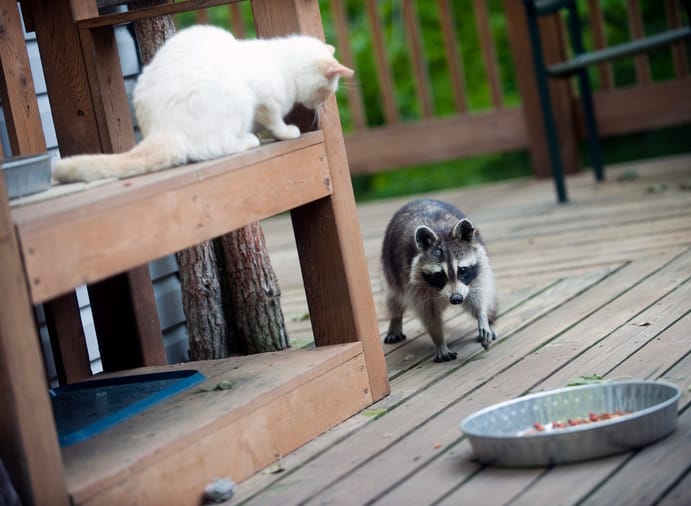 What do raccoons eat

Raccoons eat almost everything. Although they are technically carnivores, in reality, they are omnivorous animals that devour everything that can be considered food. This is thanks to their teeth, which are made to tear the meat and chew the plants, and their intelligence, which allows them to adapt to any environment and find food.

Junk is one of the favorite foods of urban raccoons, who have no problem opening the latches of garbage cans and rummaging in bags. Indeed, they also tend to discard anything they don’t like before they start eating junk.

In addition to garbage and pet food, raccoons also eat carrion. Their gargantuan appetite, therefore, also plays a very important role as a cleaner of nature.

Basically, therefore, raccoons eat everything, but their diet varies according to the food available. As a result, urban raccoons are more likely to feed on junk and pet food, and raccoons that live in natural habitats will feed on animals, fruits or vegetables.

Raccoons that live in nature will be more able to use their paws to catch fish, mice, squirrels, steal eggs and quickly enter and exit from chicken coops and houses.

Urban raccoons, on the other hand, do not have such a large amount of small animals to eat, and therefore they will focus on the garbage cans, on the theft of food for animals from parks, lakes or shops and will venture into entering houses much more easily.

What Do Raccoons Eat in the Wild?

When out in the wild raccoons will feed on anything available, both vegetable and animal food sources. Their diet will comprise of crawfish, berries, birds, mollusks, frogs, rats, squirrels and others. In case there are mice in an area with raccoons, they will be more than glad to add them to their diet. However, it’s important to note that raccoons find it extremely difficult to hunt mice due to their ability to detect their presence easily.

What Do Raccoons Eat in Your Property?

Raccoons are very opportunistic, and will generally feed on all kinds of food. If you have encountered raccoons in your property, they’ve probably made a mess of your garbage cans foraging for food. They will feed on pet food, eggs, and anything edible they find on their way. Raccoons love eating poultry and won’t hesitate to eat your chicken if they get a chance. It is therefore important to avoid allowing them to notice the presence of poultry in your home. Once you notice their presence, contact your local raccoon removal service in Whitby to remove them.

Can I Use Raccoons to Catch Mice?

Raccoons are known to catch live mice for sport, and will eventually eat them. However, it isn’t a good idea to introduce raccoons to control a mouse infestation. That would be solving one problem with another problem. Raccoons just like mice can cause significant damage to your home. They are also known to spread deadly diseases to humans.

Raccoons can’t be used to control a mouse infestation for one reason. Mice are very smart. They can detect raccoons, and it’s very rare to find them foraging for food in raccoon territory. It will also take the smartest raccoons to catch a mouse. Mice rarely stay outside; they are known to hide in decks, attics, garages, porches, bathrooms, kitchens, meaning they rarely go outside. They are skillful when it comes to searching for food indoors. Raccoons on the other hand search for food outside, they will only invade your attic, deck or porch during nesting and winter seasons.

Do raccoons keep rats/mice away?

It is a question that has two answers: yes and no.

First, it is true that raccoons also feed on mice and rats, but not predominantly on them. Consequently, if these rodents do not follow specific paths outside the home, it is unlikely that the presence of raccoons could be so dangerous for rodents as to completely eradicate their presence.

On the other hand, rats and mice are intelligent and cautious animals. They will always tend to avoid raccoons or places where raccoons are widespread.

So, in theory, raccoons could safely keep rats and mice away, but there would be a serious risk of creating another and more serious infestation problem. A raccoon infestation.

You may want to keep rats and mice away enough to forget one thing: raccoons are pests too. They are parasites as much as mice and rats and, indeed, they would cause a much higher level of nuisance, problems and destruction, being larger and more dangerous.

Always remember that raccoons are much more aggressive than mice and rats, they don’t tend to run into a corner as much as they feel they are in danger, but they tend to attack. In addition to the fact that raccoons spread deadly diseases to humans and their bites could also be deadly. In short, using raccoons to keep mice and rats away isn’t a good idea.

Raccoons have fun hunting rats and mice for fun, for sports, and then eat them. However, they are not easy prey. Rats and mice are very intelligent animals, which tend to stay very far from predators of this type. As a result, a very clever raccoon is needed to catch this type of rodent.

In general, however, raccoons tend to kill rats and mice before eating them. This is because the claws of raccoons are ideal for catching and killing rats and mice, although they are not their main meal. And once the prey is dead it is much easier to eat, calmly and in solitude. Which is exactly what raccoons do.

In fact, almost always raccoons do not eat the rats and mice where they killed them. Usually, they kill them and transport their prey to a more secluded place, so as to be safe from prying eyes (such as those of humans, other predators or other raccoons).

However, just like cats, raccoons like to play with rats and mice. They hide, observe them carefully learning their paths and attack them lightning-fast. Raccoons do not eat live rats and mice and tend to avoid eating them if possible, but to hunt them only if they are really hungry. This is because these rodents can be really combative, biting and scratching, and can transmit deadly diseases to raccoons.

What Chances Do Raccoons Have Catching Mice?

Raccoons just like cats will play hide and seek when trying to catch their prey. They will hide behind objects, barks, and trees to watch mice from a far distance before moving closer to attack. Mice and rats that get attacked by raccoons are often the unfortunate ones. The only chance raccoons get to feast on rats and mice is when they are lured outside by pet food. It is at this point they are susceptible to attacks by raccoons. Mice and rats are intelligent and can track and trace their route back to their hiding spots making them a hard target for raccoons.

Raccoons will not actively hunt for mice and rats; they don’t enjoy feasting on these little rodents. Raccoons will only hunt other animals when they are extremely hungry and have no option. There have also been reported cases of transmission of diseases from mice or rats to raccoons, especially when bites are involved. Due to this, raccoons are very skeptical when it comes to feasting on rats or mice. Therefore, if you have a rat or mice problem, the best and most effective solution to your problem would be to contact your local pest control professional such as Raccoon Control.