The following article details a mouse extermination and raccoon removal service in Etobicoke. Raccoons had broken into the attic by tearing a hole in the side of the roof, allowing mice to come in after them. A member of the Raccoon Control team removed the raccoons by installing a one-way door to the point of entry and prevented the animals’ return by covering the hole with flashing. The mice in the attic were exterminated along with the raccoon removal by using commercial grade rodenticides.

The first thing a wildlife control technician does upon arriving at the scene is to complete an exterior inspection. This lets the professional get to the bottom of the issue so he or she can remove the animals effectively and keep them out for good. Here, the technician examined the roof for points of entry and signs of raccoon damage. Raccoons frequently break into attics by tearing at the roof’s edge, breaking roof vents, or pushing into the soffits. The owners of this Etobicoke property reported that raccoons had damaged the shingles on a corner of the roof, and they could hear them in the attic at night.

Upon taking a closer look, the technician found that raccoons had indeed broken into the attic by breaking through the roof’s edge. Shingles were broken at a corner of the roof, revealing a hole that went right into the attic. The hole was only a few inches wide, but large enough for a raccoon to fit. This is a classic example of a raccoon’s entry point. Other weaknesses noted on the roof included roof vents, ridge vents, and the remaining roof’s edge, but these showed no signs of damage.

Following the exterior inspection on the roof, the technician went inside the attic to check if there were babies inside. It was March, and raccoons usually have their babies starting late winter and continuing into spring. If there were babies in the den, they would have to be removed by hand and reunited with their mother. Separating a mother from her cubs is not only inhumane but risks causing more damage to the roof as she tries to get back to her cubs inside the attic.

In this case, there were no cubs found. However, the technician found signs of mice. Burrow holes were found in the insulation, signifying an infestation of mice. While there is not usually much food in attics, mice are attracted to them for their warmth and security from predators. Once inside the house, mice can scavenge for food in the kitchen or wherever it might be found.  Raccoons can also bring some food into attics with them, from which sometimes the mice can feed on.

Given the presence of a raccoon and some mice, the technician recommended installing a one-way door to the raccoon’s entry point and eliminating the mice there with a commercial grade rodenticide bait program. The one-way door would let the raccoon out without being harmed, and the bait would target the mice specifically. To keep them out, the technician also recommended covering the roof’s vents and strengthening the roof’s edge with mesh. The homeowner agreed to evict the raccoon immediately and start the mouse control program. 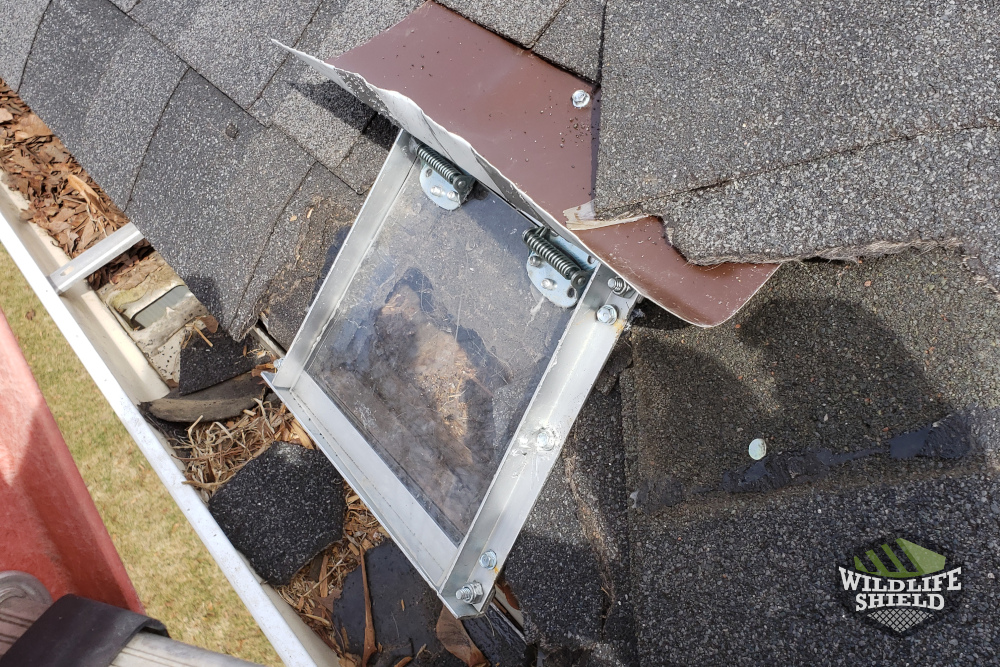 One-way doors are fantastic for the removal of raccoons. They are totally humane and can be removed as soon as the animals are gone.

After inspecting both the exterior and the interior, the technician on site installed a one-way door to the hole in the roof. This consists of a flap made of plexiglass that only swings forward, letting raccoons leave their dens but blocking their re-entry. The one-way door was attached by screwing it directly into the roof along with a piece of metal flashing. This is an excellent raccoon removal method as it does not harm the animals. Once out, the raccoons would find another place to live.

Along with the door, the technician placed bait stations throughout the attic. Bait stations are little tamper-proof boxes that contain rodenticide. They have holes on their sides to let mice in and out and require a key to open. These bait stations are tamper-proof so that other animals do not have access to the rodenticide inside. The rodenticides are specifically formulated to appeal only to rodents and require several ingestions to work. The mice in this case would consume the bait and perish within a few weeks.

Within a few days, the raccoon was gone. Raccoons go in and out of their dens to feed, so they are usually gone a few days after the installation of the one-way door. While no additional exclusion work was performed, the door successfully evicted the animal from the attic. The technician then returned to remove the door and replace it with metal flashing so that the entry point could not be used again. This flashing is strong enough to withstand the chewing and tearing of animals hoping to break in.

Raccoons are smart, destructive animals, but their removal is usually straightforward for an experienced technician. Professionals know the signs of a raccoon problem and can remove the animals safely. They also have the tools to handle any other issues that come with raccoons, such as mice. One pest often leads to another, complicating the problem and causing more damage to the home. Thankfully, professionals have what it takes to provide comprehensive pest control solutions. Both the raccoons and mice in this case were gone within a few weeks.