This article will analyze and recount a case of a live raccoon and babies in an unknown entry point in the attic. The activity was said to be long-standing. It will detail the steps taken in exclusion, by the technician, to humanely remove the raccoon from the attic along with an inspection for immobile raccoon babies. The technicians, before the exclusion, must first inspect and confer with the customer or customer’s on the issue and then must inspect for levels of activity. The customer’s original complaint was the presence of a raccoon on the roof for an extended period of time. The issue was likely long-standing. A technician was sent out to inspect the attic for raccoon babies and to exclude the raccoon using a one-way door. One of many successful raccoon removals in Brampton.

Brampton was a small town of only fifty inhabitants when it was incorporated as a village in 1853. Its name came from a market town in Cumbria, England with the same name. The village became a town and was known as The Flower Town of Canada because of a massive greenhouse industry. Today the population of Brampton is 593,638 people and instead of greenhouses, they specialize in Industry and manufacturing. Mass immigration was the original cause of the expansion of the city in the 1950s but became a hot spot for business and has been growing since.

When the technician arrives on site they will perform an exterior inspection of the outside of the house. The initial inspection on-site was to remove a raccoon from an attic, the entrance was unknown at the time and to inspect the attic for immobile raccoon babies which must be removed safely so the mother can take them off the property. This led to the installation of a one-way door with exclusion in a nook in the roof with a soffit meeting roof.

The attic inspection revealed immobile raccoon babies which were removed and placed in a box near, on the ground near to the exit constructed for the adult raccoon. This is necessary as raccoon babies are blind and immobile for the first few weeks of their lives.

The technician allows the mother raccoon to vacate the chimney and then removed the raccoon babies and placed them in a small box on the ground near where the mother exited. The technician then disinfected the inside of the chimney. Technician returned on-site and raccoon and babies were gone.

The condition of the shingles on the roof was poor which also could allow animal entry. The original soffit where the babies were found was sealed with flashing. Upon returning the door was removed and the entranceway was sealed. 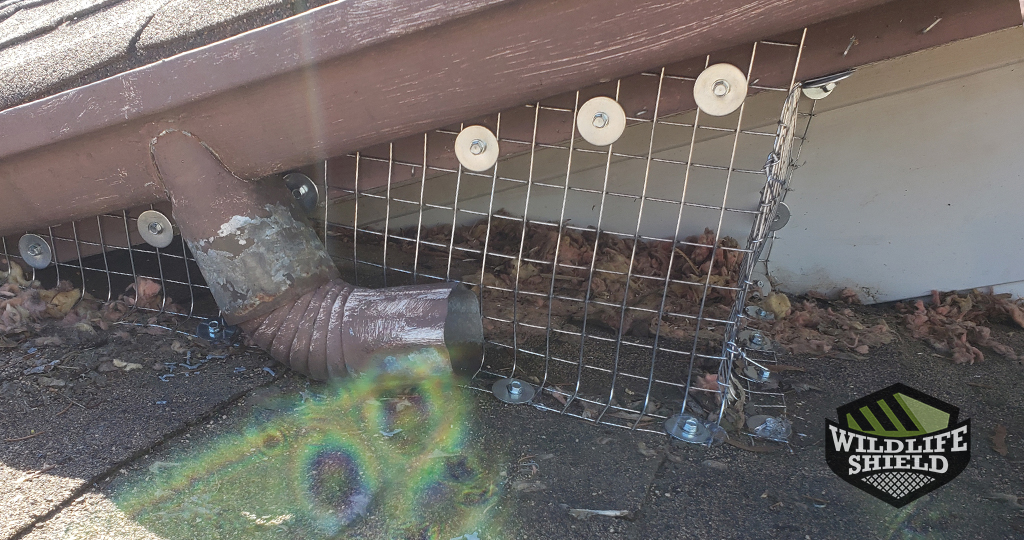 The initial inspection found a large amount of exclusion to be done along with the construction of a one-way door and exclusion surrounding it. The raccoon was vacated and the immobile raccoon babies were successfully removed from the attic and taken by the raccoon mother. All exclusion was completed on site. The customer was pleased with the work and the one-way door was taken down nine days later.