The following case study details a raccoon removal and feces disinfection job in in York. The customer first called when they believed a raccoon mother had gotten under her deck and into the crawlspace below her home. A crawl space is an area under a home, often an old home, that has no foundation or basement. The house is constructed either on a flat concrete surface or is built on top of the ground without any concrete support at all. These types of crawlspaces with just a soil floor are a great place for burrowing animals to nest. It is a space that is rarely entered, if ever, and is often too small to stand so you need to crawl, hence the name. The customer also stated the raccoon had signified its presence by defecating on the very deck it burrowed beneath. This is a good thing as the feces tipped off the customer that something else could be going on.

The exterior inspection found an opening, or burrow under the deck. In this situation the deck did not need to be trenched as it would be if an animal was living under it, the one-way door was attached to the house itself. The one-way door is a device used by wildlife technicians to humanely evict animals from an enclosure. This cannot be done if the animal is not inside of something, an attic, a deck, a crawl space. Raccoon feces were also found on the deck and were removed by the technician. This requires careful removal as raccoon feces contains a deadly parasite called raccoon roundworm if it enters your lungs it can enter your bloodstream and travel to your brain where it causes Alzheimer ‘s-like like effects and is entirely incurable. 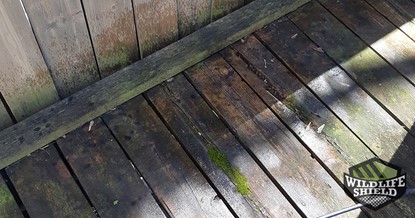 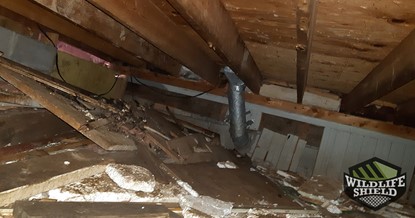 The initial measures taken by the technician included the removal of raccoon feces and the exclusion of the crawl space. Houses with crawl spaces have no foundation and are often built right on top of the ground. While this is fine for a cottage you visit once a year having it as your main abode can be problematic because animals and rodents will use that crawlspace and so will a large number of insects.

The proposed exclusion involved attaching a one-way door under the deck at the entryway of the crawlspace. The one-way door must be attached to an opening using bolts, washers, and galvanized waterproof steel mesh. This process is called exclusion and can be done anywhere in a house that could be a sensitive entry point for an animal. This includes plastic roof vents, open or easily damaged wall vents, soffits, and roof soffit intersections. The drip edge is also a place animals can enter your attic through. The number of possible openings can be scary at first, but with a 2-year warranty on every spot and the sense of relief that if something gets in again it will be removed for free. 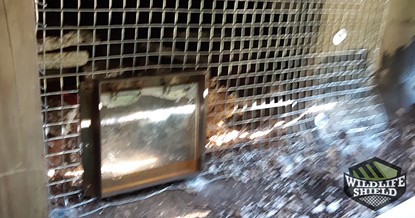 In conclusion, the process was highly effective and the raccoon was evicted. The feces was cleaned and the customer has yet to contact us about further feces clean up. The deck and crawlspace are now protected and the customer is pleased with the work. Call Raccoon Control today for high quality raccoon removal services in the GTA.